My first cycling memory is from the winter of 1956. I was three years old and we were building an attached garage to the house we’d lived in for a couple of years. I can remember riding my trike on the new concrete slab in a partially-framed garage, bundled against the winter cold.

Fast-forward to the spring of 1958. I was five. I was the proud owner of a

two-toned green-and-cream Columbia bike, 20” wheels, single-speed with coaster brake; a hand-me down from my cousin in Milwaukee.  Left is a reasonable facsimile of that bike.  Sorry, I have no actual pictures of that or my old trike.

Riding a bike is a lot like reading or learning a foreign language. You can imagine you’re doing it before you can really do it. Once you actually learn, you realize you’d been deluding yourself.

When I first learned to read, I fooled myself by reciting books I’d memorized, even knowing when to turn the pages. One day I actually learned to read and that was a totally new experience.

When I first learned to speak Spanish, I thought I was speaking Spanish, but I was really translating other people’s words into English in my head, formulating responses in English, then translating them to speak. It is slow and cumbersome and doesn’t work in the real world. The day I began to think and dream in Spanish was the day I realized I’d been deluding myself.

The day I actually rode started at the top of a slight incline in front of our house. My dad had his hand on the back of my saddle and ran along beside me. When I got to the Iverson house, I thought I was really riding. I yelled to my dad but he didn’t answer. I yelled again. In front of the Benisch house I turned to yell again and he wasn’t there. I crashed into the ditch. When I picked myself up, I realized he was back in front of the Van Epps house. I was like the cartoon character who runs off a cliff and doesn’t fall until he looks down and realizes what he has done. (The clip is not the best example but the best I could find today.)

It would be nice to say that I rode off and never looked back, but that crash spooked me and it was still a struggle before I really learned to ride; but I now knew what riding was.

The bike gave me a new freedom. My dad was infamous in our neighborhood. When it was time to come home he whistled, an ear-piercing sound that involved his thumb and middle finger in his mouth and a distinct three-note sound heard for blocks. When he whistled, we ran.  I remember playing baseball in a friend’s backyard and being at bat. At the whistle I dropped the bat and ran home. My friends thought I should finish my at-bat. I knew better.  But on the bike, I could get beyond earshot. I could ride to places where I could honestly say I didn’t hear him. That was not always considered a legitimate excuse.

I rode a variety of bikes after I outgrew the two-toned Columbia. None was actually my bike. My sisters both got new bikes. My older sister had a single speed 26” wheel Royce Union; a beautiful, lightweight, dark blue, lugged steel frame; cottered cranks, single speed with coaster brake. My other sister had a powder blue 24” wheeled bike, Montgomery Ward, if memory serves. My brothers had various black English 3-speeds. I rode them all whenever someone else wasn’t riding them.

We also had a Schwinn Twinn single-speed tandem. It was particularly fun to ride from the rear (standing on the pedals so I could reach the front handlebar) and watch people stare, especially when I changed from back to front while riding or when someone told me I wasn’t supposed to ride like that. Plus I could pick up a friend to go for a ride.

The next bike that was my very own was a Western Flyer by Western Auto. I took over a newspaper route when I was 12 and the previous owner of the route sold me his bike. It was black and cream with huge front and rear baskets. It was the bike that taught me not to dismantle a coaster brake and how not to true a wheel.

Once I sold that bike (along with the paper route), it was back to the various black English 3-speeds. The first new bike of my life came in the spring of 1974. I had just turned 21. I was recovering from ankle surgery and being mobile was very important.

I drooled over a silver Masi, Campagnolo-equipped; 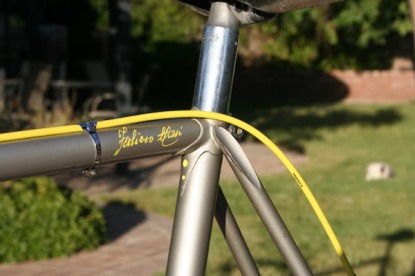 but I bought a Motobecane Grand Jubile, red with black trim and gold

pinstriping.  It was on that bike that I did my first loaded tours, camping with my friend Al. On our first tour we spotted some wild asparagus growing in a roadside ditch. Fresh asparagus for dinner sold me on bike touring instead of motorcycle touring. (Another reasonable facsimile, thanks to Google image search.)

When I was in my early 30s I had a neighbor who was in law school. He told me that, upon graduation, he was going to cross the country by bike and invited me to join him. I had a job I wanted to keep so I turned him down.  He made the trip without me. But someday, I thought…

In October of 1989, a few days before the Loma Prieta earthquake, my beloved Motobecane was stolen from my office in San Francisco. I later found out who stole it but it was too late to do anything about it or prove it.  I embarked on a serious bike-buying mission and, on my 37th birthday, bought myself two new bikes – a 55 cm Davidson road bike and a 56 cm Bruce Gordon touring bike.

The Davidson is Shimano 600-equipped (the name changed to Ultegra the next year). It included a tied and soldered rear wheel, which is still true after 28 years. The wheels were built by Vance Sprock at Cupertino Bike Shop. Bill Davidson is still building bikes in a small shop in Seattle. http://davidsonbicycles.com

The Bruce Gordon is Shimano Deore XT-equipped, with Bruce’s own steel racks and half-step plus granny gearing with bar-end shifters. (For explanations of half-step plus granny and a host of other fascinating topics, see http://sheldonbrown.com) It was to take me on that US tour. As of this writing, Bruce is having a retirement sale in his shop in Petaluma, CA. By the time you read this, he may be out of business, or you may be able to buy a fully-equipped frame building shop. http://www.bgcycles.com.

It is now 28 years later. The tour is going to be for my 65th birthday. The bikes are getting a little old to trust on a coast-to-coast trip. I’m getting a little old to want to do a self-contained tour. That means it is time for a new bike again. If you remember back to that Masi in 1974, my other dream (besides the US tour) was for an all-Italian bike. That was the dream of a lot of riders of a certain age. Most bikes are now built in China, most parts come from the Japanese industrial giant Shimano, and Campagnolo, once the gold standard in bicycle components, has been reduced to a small niche marketer.

Since I don’t plan to carry a lot of weight (this being a supported tour) and I probably won’t buy another new bike after this one, I have joined the 21st century with a Wilier Triestina Zero.7, Campagnolo Super Record-equipped.  Wilier is an Italian company founded in 1906. The name is an acronym (in Italian) for “long live a free and redeemed Italy”.  (Though the name predates the acronym by 42 years; don’t ask me to explain that.) It is my first carbon fiber bike and probably weighs about half as much as the Bruce Gordon. This is the mount that will take me across the country. I had Yellow Jersey Bicycles in Arlington WI build me a new set of wheels, so I won’t actually ride across the country on the carbon fiber wheels in the picture.  Pictures of the bike as equipped for the tour will come once I’m on the road.

Yellow Jersey, by the way, began life as a co-operative, without a building, in Madison . They ordered bikes through a co-op in Chicago. The bikes were delivered to Whole Earth Co-op, and Yellow Jersey called members (especially those who had ordered bikes) to come and help assemble them when shipments arrived. They later had a series of storefronts and ultimately the co-op’s assets were sold to some of the employees. The proceeds funded the Dane County Bicycle Association, a local advocacy group.  Yellow Jersey is now owned by Andy Muzi, one of those employees. He has been with Yellow Jersey since the beginning of the co-op, or close to it. A few years ago he closed the store in Madison and moved to the small town of Arlington. Drop in for a visit! 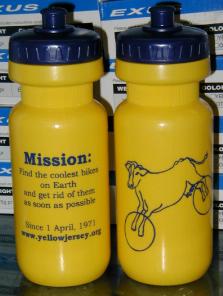 Yellow Jersey water bottle.  Don’t make me explain the logo.  Wisconsin law forbids the use of the word “co-op” by any entity that is not incorporated as such. When Yellow Jersey was sold, they ground the word off of the existing stock of bottles so they could still sell them.

6 thoughts on “My origin story”