Some time back (March 24) I waxed rhapsodically about my first bike tour and fresh roadside asparagus. As we get closer to departure day, I remember my first planned long-distance solo tour to remind myself why I chose to make this a supported tour.

I outlined an epic journey. Several variations awaited me. The trip was to start by riding west from Madison to the Mississippi River. I would head upstream to the confluence with the St Croix River, following that up toward Lake Superior.

At that point my first option arose: I could turn east and head along the south shore, with a plan of circumnavigating the state of Wisconsin, or I could keep going north and follow the north shore of Lake Superior in Canada with the aim of  making my way down the west side of Michigan and ferrying back to Wisconsin. (Check out Google Maps to follow that route – easier than trying to link to a map of my route, and that way you can scout around.)

If I took the shorter route, I could also choose whether to merely circumnavigate Wisconsin (said to be about 1400 miles), or continue along the shore into the UP. Hah! So much for plans.

Less than 100 miles from home I spent my first night with friends on their farm. It was to be my last night sleeping in a bed for a while. Unfortunately, they were all sick.

I hit the road next morning. Now, southwestern Wisconsin (the driftless area) is pretty hilly. Still, it seemed hillier that morning than the day before. I struggled up climbs. I decided to cut my day short and settle into a semi-secret campsite along the Kickapoo River. (Don’t look for a map link here, I said it was semi-secret.)

A little aside: the Kickapoo River valley was to be dammed as a flood control project. (It would, incidentally, create new lakefront property for resorts and rich people’s summer homes.) The federal government took title to many acres of farmland (140 farms) that they intended to flood. The locals rose up and the plan was scuttled. The land went wild.

I didn’t leave that site for the next few days. I was lucky to make it out of my tent for a while each day. On about the third day I decided I was too sick to not be around other people. I packed up my camp and got back on the bike, riding to the top of nearby Wildcat Mountain, where there is a state park campground.

I sweated up the hill, got to the park, put down the bike, and lay supine under a hose bib, running cold water over myself. A park ranger came by and asked if I was OK. I said, “not exactly, but I’ll be okay in  few minutes.”  I went into the office and reserved a campsite, set up my tent and went back to bed. It rained for the next three days or so.

By the time I was well enough to get back on my bike, I had lost weight and had no energy left. Plus I’d lost about a week of riding time. Time for a new plan.

I was digitizing slides today when some of the images reminded me of the next phase of the journey.

Upstream I came to the town of
Maiden Rock. I’ll let the historical marker tell the legend of the rock (follow the link). I made it to Winona MN and met a community of folks living in houseboats in the backwaters of the Mississippi. One of them was away and they were kind enough to lend me his houseboat for the night.

I took some photos at dawn, and here it’s time for another aside: Years later I was working at a cooperative community and one of my neighbors (an evangelical Christian) showed me a “picture of Jesus”. Her church did full-immersion baptisms and when she developed the film of her friend’s baptism, there was  a foggy spot on the picture. She solemnly assured me that that was the image of Jesus. I told her I had a picture of the Buddha. She had to see it. It was one of my sunrise photos of the backwaters of the Mississippi. Here it is: 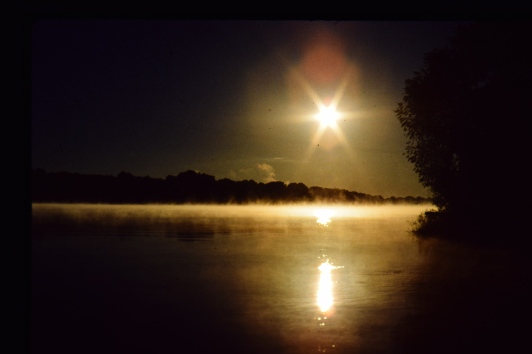 The reddish orb at the top looks to me like a head. Just below the head you can see shoulders (at the upper points of the star) to each side. The light emanates from the belly. Less obvious in this small reproduction is the appearance of two knees just below the belly (at the middle points of the star), as though of a figure sitting cross-legged. She studied the picture for a long time, then earnestly pronounced it to be a picture of Jesus.

I rode up to St Paul, stayed with friends and ate until I felt semi-human again, then packed the bike into the cargo bay of a Greyhound bus and returned home. So much for circumnavigating Lake Superior, or Wisconsin, or much more than my campsite.

P.S. I forgot to mention last week that spring ended abruptly a week and a half ago with a temperature of 95 degrees and the hatching of millions of mosquitos that know nothing except the sucking of blood.

The good side of summer arrived today. Sitting on the Terrace,

my feet in the water, sipping a beer, listening to live jazz. A breeze off the lake, temperature down to a totally reasonable 78 degrees. This may detract from the universality of the image, but was the icing on the cake for me – FaceTime with my Officially Adult child – college graduate last weekend, first day in a new city, first day of a new job, first day in a new apartment. Life doesn’t get much better than this; and I haven’t even started riding…