“He will sleep ‘til noon/but before it’s dark/he’ll have every picnic basket/that’s in Jellystone Park.”

We can sleep in Friday. We don’t load the trailer until 6:45. We have our shortest day yet scheduled – 64 miles. On the other hand, the forecast is for thundershowers all day along our route, with temperatures in the 40s and low 50s.

We’re just outside of Yellowstone. On our own for dinner and breakfast. Dad gave us our allowance last night in Ennis. Here is the link I wanted to add yesterday. We’re now at 6666 feet.

As most of you know, Yogi Bear is a paean to the great Yankee catcher Yogi Berra, who taught me that “you can observe a lot just by watching.”

On the topic of Hanna-Barbera cartoons, have y’all noticed that The Flintstones is The Honeymooners set in an earlier time? Fred Flintstone is a dead ringer for Ralph Kramden.

Thursday’s ride was a gorgeous trip from Ennis to West Yellowstone. It was a chilly start but I was properly dressed. I was finally able to delaminate after lunch. It was windy, but we all know that when the going gets tough, the half-fast go for a beer.

We passed the Blue Moon Saloon early; not to be confused with the Blue Moon a few blocks from the hospital, where surgeons stop for a quick one to steady their hands before a long day in the OR. 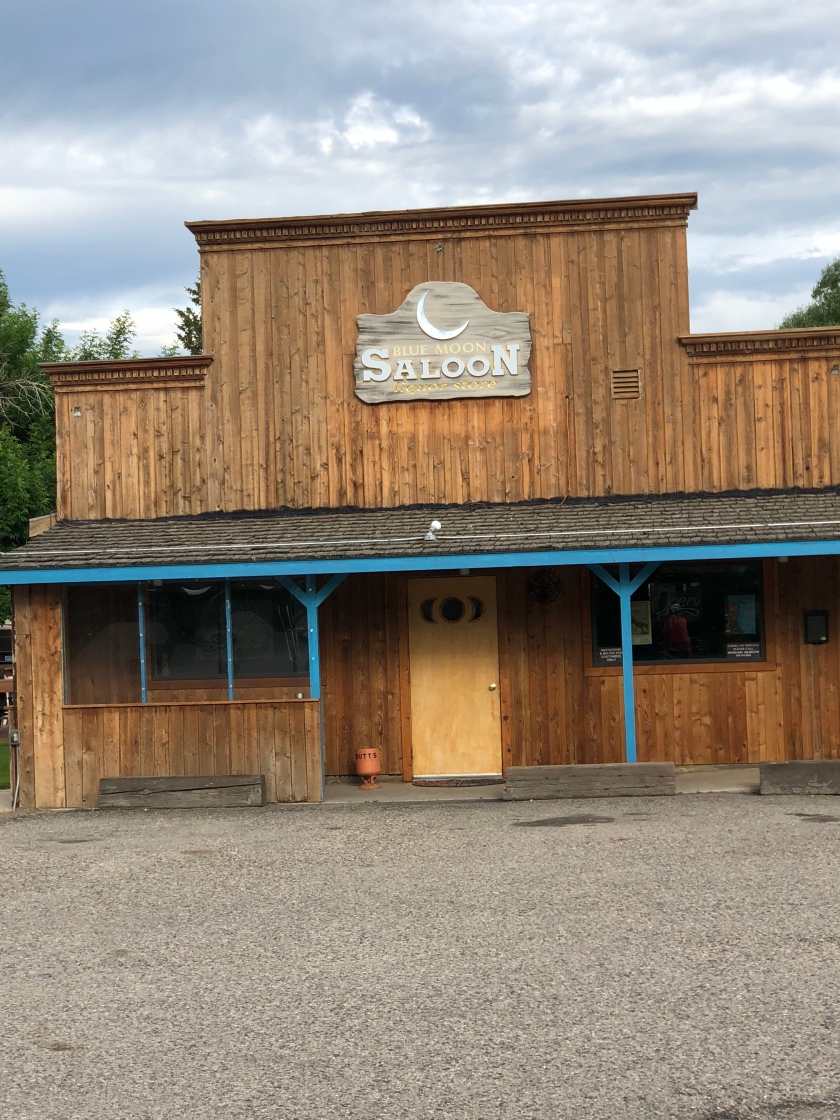 Next up was Sphinx Mountain. Recognizing it is kinda like recognizing constellations – it helps to have someone point it out, and it helps to have a good imagination. The wilderness doesn’t come with big signs pointing out the attractions.

We rode on to Earthquake Lake which, like Lord Voldemort, is “great…terrible, but great”. Earthquake Lake was formed by a great quake in 1959, which caused a huge landslide and rerouted a river, inundating a valley and wiping out a campground. It struck in the middle of the night. There were no survivors. 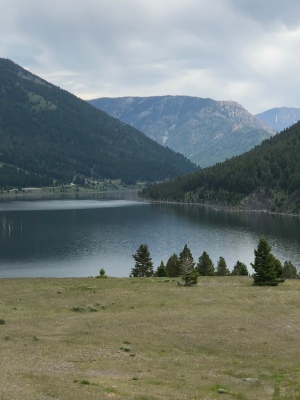 The last ten miles were into a headwind, which seems to be a theme. The end of several days has been about making it in. To add insult to injury, Ally changed clothes and went for a run.

To paraphrase Commander Cody, “She was riding up Grapvine Hill/passing bikes like they were standing still.”

I’ve been thinking about road signs. We were lied to all day today. Signs kept saying “Bisons on roadway”. I never saw any bisons. At the first sign I asked Ally to scout ahead for bison. She said, “that’s what Corey is for”. He was ahead of us at the time.

Since I seem to be having success uploading photos  (4 bars here), I’ll add a few of those I described earlier.

The view from Flesher Pass (continental divide) and your correspondent at the divide. 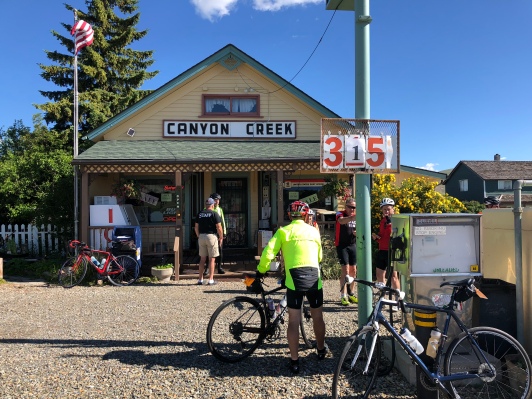 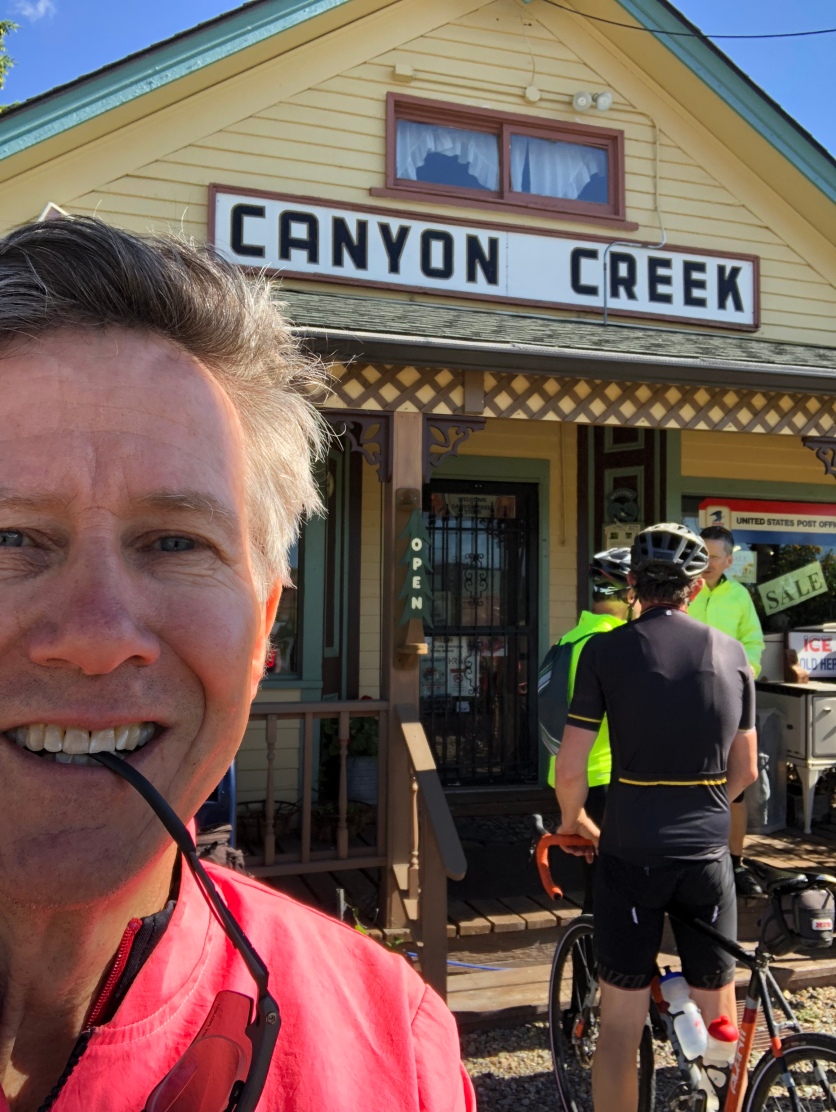 As the former host of “Rutabaga World News” on WORT-FM, I couldn’t resist this one. This tune was my theme song. The live version here (at a 40th reunion concert) goes on for a while and includes a duck call solo.

While we’re at it, I’ll throw in a couple of pictures from Ennis, known chiefly as a fly fishing destination. The number of great trout streams around here makes me wish I were reading “Troutfishing in America” by Richard Brautigan again. Horse and rider statue, two views of fly fisher, full moon over campsite. 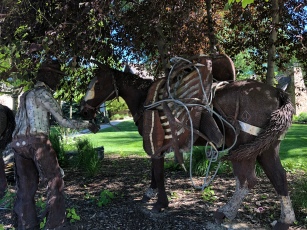