Only a metric century today, done before noon, but clearly not a rest day.

The forecast was for thundershowers overnight. It was windy with scattered showers in the early evening, but I awoke at 3:40 AM to a bright light in the sky. It was too high to be an area light at the school. Crawling out of my tent I confirmed it was the nearly-full moon in a clear sky.

I had breakfast at “Running Bear Pancake House”. It was sunny when I arrived there and got steadily darker. They opened the shades, then turned up the lights.

Leaving the restaurant, I was warming up slowly when a 3 person paceline passed. I swung in behind, warmup over, as they were going considerably faster than my warmup pace, but this was not a day to ride alone.

As we started up a gradual incline before the pass, it started to rain. We saw lightning ahead. The rain got harder. Then it got harder in a more literal sense as it changed to hail.

We crested at 7072 feet during a brief respite from the rain. That is my one picture from the day. No time for anyone to pose touristically. It was cold (42 degrees by my thermometer) and the rain was coming back. 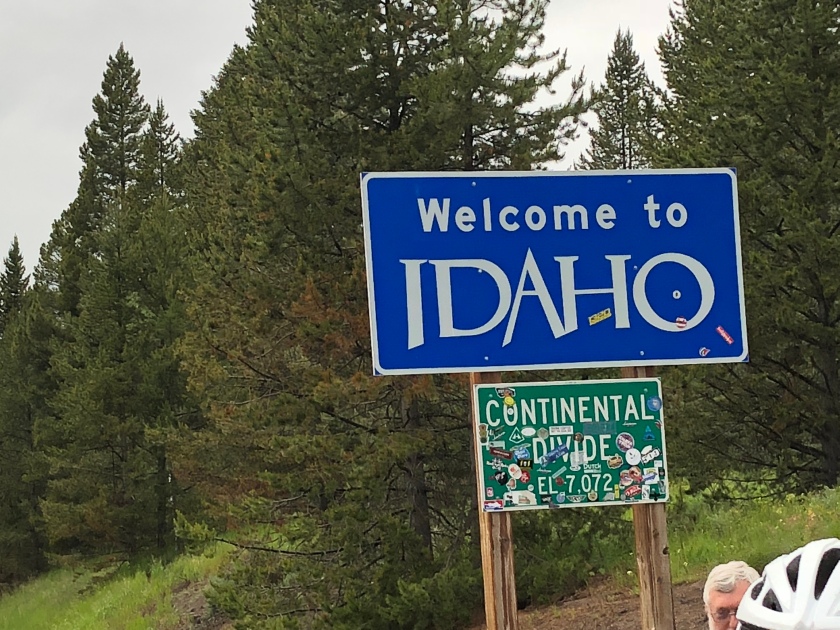 We had to control our speed on the descent due to the wet, cold, and low visibility. We arrived at the first water stop at a turnout. I promptly rode off the pavement and put my foot down in a 6” deep puddle. I changed from rose-colored to clear lenses in my glasses at that point.

Strictly for survival, we continued on at 22mph. We were on a US highway with no shoulder. It was sometimes hard to tell which was worse – pushing the wind in front or eating the spray from another rider in back.

A word about pacelines here: yesterday I was thinking, “I didn’t come this far to stare at the backs of other riders”. I rode alone all morning, looking at the scenery. Today I was thinking, “There is safety in numbers.” I stayed all day with Steve from Seattle and Ally and Ed from New Jersey. At the lunch stop we picked up Corey from the Twin Cities area.

I decided that my decisions day-to-day are personal ones, not moral judgments.

Before lunch we turned onto the “Mesa Falls Scenic Byway”. I saw signs for how far we were from Ashton and knew that our remaining mileage was about double that. At the moment it seemed cruel, but the scenic byway was beautiful and I sat up and enjoyed the scenery, scanning the surrounding woods for critters. I didn’t have to scan to see the elk that cantered across the highway just in front of Steve.

Lunch was at the waterfall. The only pictures I have are mental ones. Hot chocolate, hot soup, and grilled cheese sandwiches saved the day.

After lunch we continued on the scenic route. The rain abated and for about 30 seconds on one climb, I could have sworn I felt heat radiating up from the pavement – Corey confirmed it.

I needed a new song:

We rolled into Ashton with it not raining (at least I don’t think it was). It was too wet to hang anything out to dry. I discovered I was dry under my rain clothes (except for hands, feet, and head). I had wrung out my gloves several times during the day.

The sun came out so I cleaned and lubed my bike and brought stuff outside to dry. The sky turned black and lit up with lightning and I hurriedly moved everything back inside.

The storm passed, a near-miss. Tomorrow is over Teton Pass, 8431 feet and a 10% grade. Weather here seems to change by the minute so I’ll figure out what clothes to wear when I wake up. That’s the first order of business every day, before I get out of the sleeping bag.

A future post will talk about my daily routine. For now I’ll just say that I’m pretty active at work; not used to sitting this many hours/day.