July 19, 1979 marked the triumph of the Sandinista Revolution over the Somoza family dictatorship in Nicaragua. I have to mark this day with “Hijos del Maíz”, by Luis Enrique Mejía Godoy y Grupo Mancotol.

For those who speak no Spanish, the song says that the Nicaraguan people are children of corn, and describes the many influences and uses of corn in their culture.

While in Nicaragua, I had the opportunity to hear his brother Carlos sing. He was described to me as “the Nicaraguan Bob Dylan”. That Dylan lacks a brother like Luis Enrique weakens the comparison for me.

I also have to mention one of my personal heroes. Ernesto Cardenal was born January 20, 1925, exactly 28 years before I was born. There is a 28 year cycle in many calendars, so this might mean something. It might just mean I’m full of myself to think I can compare myself to him in any way. Cardenal is a poet, a priest (who once studied with Father Thomas Merton in Gesthemany, KY), the former Minister of Culture of Nicaragua, and the founder of a communal artistic community on the island of Solentiname in Lake Nicaragua.

He is known mostly for long narrative poems and his poem “Zero Hour” (“Hora Cero”), about US imperialism in Nicaragua and the murder of Sandino, is one of my favorites. I had the pleasure of hearing him read from “Cántico Cósmico”, an epic poem of the history of the universe, beginning with the big bang. Yes, you can be Roman Catholic and recognize the big bang theory and a universe billions of years old.

He also wrote simple and short poems, so I offer this:

This will be my revenge:/ That one day a book by a famous poet will come into your hands/and you will read these lines the author wrote for you/and you won’t know them.

(I can’t seem to get line breaks to appear without extra spacing, thus the slashes for line breaks.) Somewhat the reverse of Carly Simon’s “You’re So Vain”.

We are two days from Northfield,  where my daughter spent the last four years at St Olaf College, a running Ole and Lena (or Sven and Ole) joke.

We slept in today because it was a short ride. We were headed north-northeast, with a wind from the southeast. During northerly stretches it felt like a tailwind and during easterly stretches it felt like a headwind. We mostly rode north so it was an easy 61 miles. The sun was filtered and it stayed cool. The forecast is for thunderstorms tonight so we were eager to beat the weather into Watertown.

Riding out of town we passed the Wilder homestead where I learned that Laura Ingalls Wilder’s daughter was also a writer and the oldest war correspondent in Viet Nam.

We stopped in Hayti for gumbo, so of course I thought of Hank Williams. 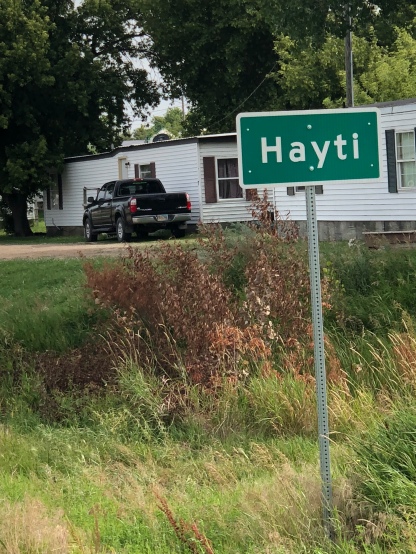 Leaving Hayti we rode along a lake, a great change from the endless miles of prairie. There were even trees! Especially welcome was the fact that we rode much of the day on state and county roads, not US highways. In my hierarchy of roads,  town roads are first, then county, then state, then US. We’ve been riding mostly on US highways.

Overheard at the rest stop (from a concept by The Cheeky Cyclist):

”It’s not a pull when  you’re trying to drop everybody.”

I needed to buy a few things and Google Maps told me there was a bike shop in town, so I checked it out:

The owner was surprised to see us. He told us the bike shop in town had closed and he knew the town needed a bike shop, so he opened this place a month ago. He specializes in restoring and re-selling bikes from the 1950s and ‘60s. He didn’t have what I needed but we had a great visit. He is trying to get a contract with Trek to sell their bikes. He currently sells no new bikes. About the only new stuff I saw was a small collection of water bottles. The shop is called simply “The Bike Shop”.

South Dakota has a program to raise awareness of highway deaths. They mark the spot of deaths like this: 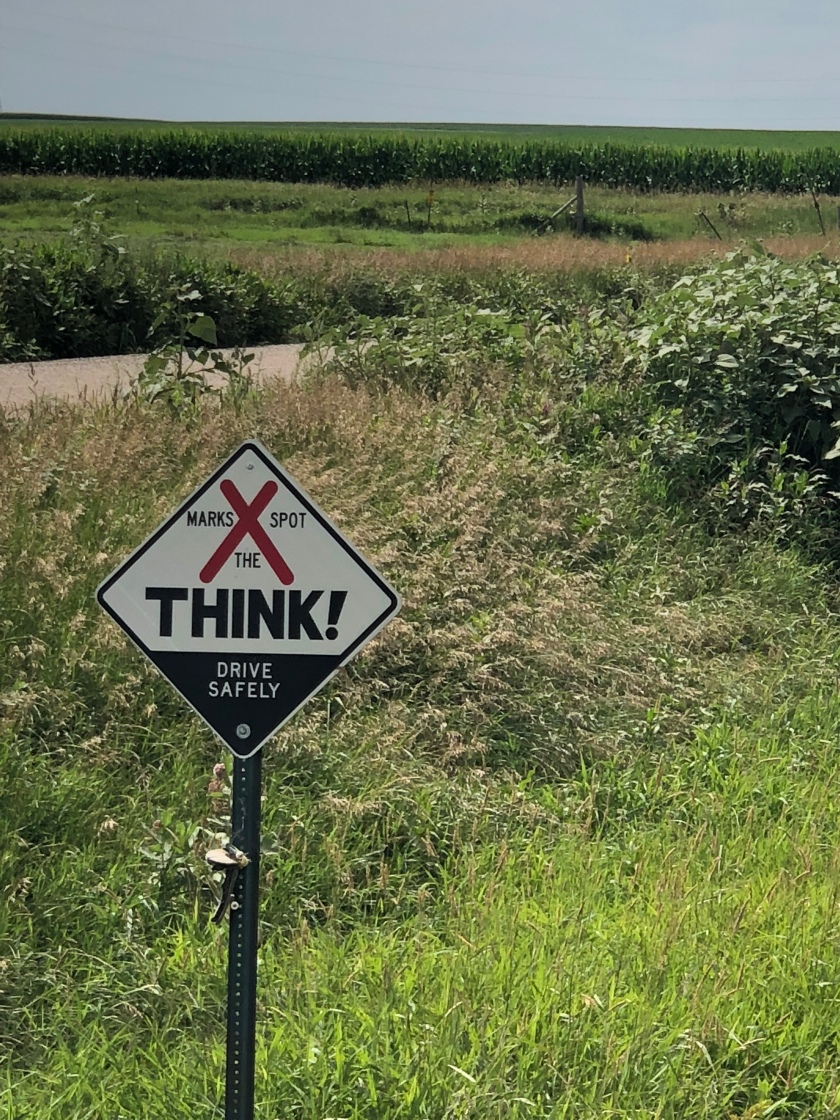 Some of the signs, instead of saying “THINK!”, say “WHY DIE?”. On a climb in the Black Hills I saw six of these signs at one curve, in groups of three, two, and one.

We are now in the Watertown Middle School. Another in a series of inspirational school posters:

Tomorrow we cross the state line into Minnesota, one more notch in our belt as we leave South Dakota behind. The forecast is for rain all day all along our route, with a stiff headwind. Oh, joy.