Today is my daughter’s 22nd birthday. As they are a big fan of Taylor Swift, I should link to a Taylor Swift song, but I can’t bring myself to do that 😉 not knowing what song to choose.

Instead I’ll go to our mutual love of Jackson Brown, and one ofthe songs that sustained me while working in a war zone in Nicaragua.

I know, this is not particularly celebratory, and doesn’t seem like a birthday song, but I think Emery understands.

We are leaving Emery’s alma mater on their birthday; this seems somehow fitting. At 22, working for a living, you’re definitely a grown-up. Congratulations!

I rode into St Olaf wearing my Wisconsin Bike Fed jersey and will ride out the same way. St Olaf’s crest contains a lion rampant, just like the flag of Flanders. The Bike Fed jersey has a cow rampant. I hope I don’t offend any more Belgians or Flemings. Thanks to Dave Schlabowske of the Bike Fed for defending our honor last time. Based on the Ole fight song (below) I don’t think they’ll take it too seriously.

St Olaf Fight Song (altered, but the version I know) (It’s a waltz):

We come from St Olaf
We wear cashmere sweaters
We live on a hill to
Be closer to God.

We don’t smoke, we don’t drink
At least that’s what they think
And under the covers
We Um-Ya-Ya-Ya.

A great rest day in Northfield, and the first one that I didn’t really need. I still felt pretty good. The bike needed it.

Dinner (as planned) last night at Chapati. Breakfast (as planned) this morning at Brick Oven Bakery. Back to the dorm to clean and lube the bike, put on a new chain, and add a second layer of bar tape after the beating I took this week. (Also washed out water bottles.)

The bike sounds happier, which makes me happy. Then down to town for a late lunch at El Triunfo (a great little Mexican restaurant) and a visit with the rug seller who sets up outside there. I’ve passed him many times but never stopped to chat. 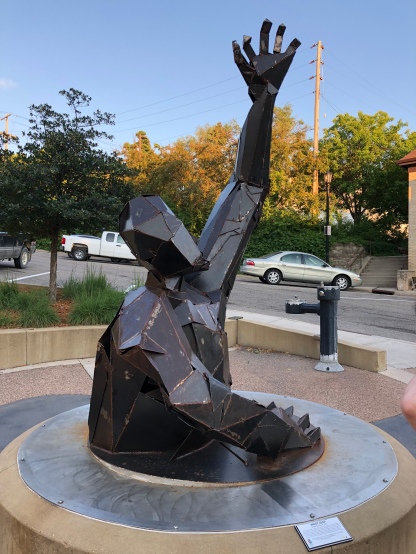 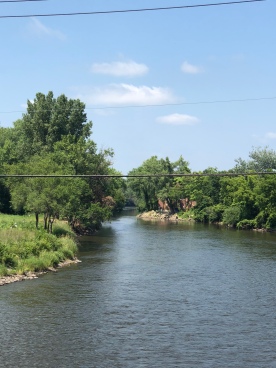 I then went on a little tour of the other (Carleton) side of town before checking out the new brewpub, Tanzenwald. They had live honky tonk music with a singer/guitarist accompanied by a pedal steel guitarist.

We will cross the Mississippi River tomorrow, another milestone. Fourteen new riders, thirteen new bikes (another tandem). A short day so they are delaying breakfast by 45 minutes.  If breakfast is like dinner, that will delay our start by about an hour and a half.

St Olaf is hopping. We shared the cafeteria with a cello institute, a chess club, and a diving camp. They had us all arrive at the same time (which is not how it works during the school year) so it was a madhouse.