Here we are at the site of Olympic heroics of 1980. Everyone of a certain age recalls the “Miracle on Ice” when a group of US college hockey players defeated the mighty Soviet hockey team en route to Olympic gold.

Then there is local (for me)-boy-makes-good Eric Heiden, who swept Olympic gold in speed skating. Eric is the brother of Beth, another Olympic and World Champion speed skater, and son of Jack, an orthopedic surgeon and bicyclist.

Eric went on to race bicycles professionally for the legendary 7-11 team (which rode bikes painted with the Murray or Huffy brand, though they were built by the great Ben Serotta) and become an orthopedic surgeon.

My camp is on the grounds of Lake Placid High School, overlooking the speed skating track.

It dawned on me, while riding Friday, that we’re about to start the last week of this journey. That means I’m about to do this!

While my focus has been on each day, I have been aware that this is a coast-to-coast trip; and that the point (to some extent) was to get to the Atlantic Ocean. After all, I did seal up a vial of Pacific Ocean water, and I have carried it across the country.

But still – on some level it didn’t feel real until Friday. Truth be told, my focus hasn’t been on each day, it has been smaller than that.

I spend much of the time looking around. As far as distance, my focus is like this:

The first five miles are my warmup

When I’ve completed 10% of the day’s miles, I’ve started

At 70%, things are looking good

At 90%, it’s in the bag, AND it’s time for increased vigilance – it’s in those last few miles, with fatigue setting in, that I’m most vulnerable.

On really long days I also look at miles – with 30 miles left, it’s an average Wednesday Night Bike Ride. I can do that. At 20 miles, it is the short route, or an early season ride – piece of cake.

In the same vein, this last week will call for increased vigilance, as well as simply paying attention. I don’t expect to do this again. I don’t want to miss anything. Barring disaster, I’ll do this; but it’s not done until I dip my tire in the Atlantic.

Today was a beautiful ride. We started late due to catering problems. The road early in was what Don described as “a bicycle autobahn”  – beautifully paved, with a shoulder wide enough to ride four abreast. As we moved into resort areas, the traffic got heavier, the road got narrower, and the pavement got worse.

I had my first flat in weeks. Tomorrow I will replace the tire, which is looking a little thin and has multiple cuts.

The route was up and down a lot. After 60 miles we had climbed more than 2000 feet but were at the same elevation as when we started – all of our net gain came in the last ten miles.

While we’ve been in the Adirondacks for most of the past two days, we finally see what looks like mountains. 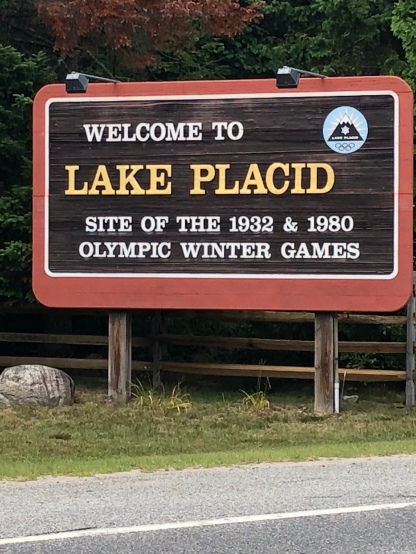 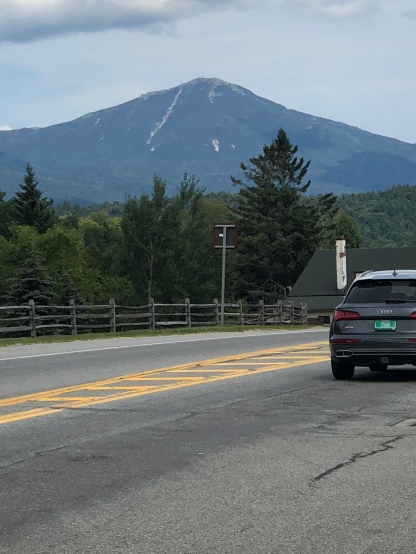 A day off tomorrow, to do laundry, change a tire, visit the local bike shop. If I feel ambitious, there is the option of a 40 mile out-and-back ride to climb a nearby mountain, or a ride up to the Olympic ski jump.

[if there are formatting weirdnesses, I’m writing this on the phone keyboard, as I found a brewpub with WiFi.]