A beautiful 95 miles through the Finger Lakes, from SUNY-Geneseo to Seneca Falls, NY.

Just my cup of tea – lots of short, steep climbs and descents. On one long descent, dropping several hundred feet of elevation, I realized we would have to earn back every one of those feet. I didn’t mind.

I did wish for another top-end gear or two. With my highest gear a 50/11, there were times I was coasting but wanted still to be pedaling.

It stayed hot all night again, but no dew. A few sprinkles at 6:30 AM dampened the pavement to keep it cool. The forecast was for thunderstorms. It stayed overcast most of the day, which also helped keep it cool.

We saw a storm passing across the north end of Seneca Lake. I was hoping we were riding slowly enough to miss it. Not quite. We had a few minutes of light rain. The entry into Seneca Falls was very bike-unfriendly, but other than that, it was a day of good roads, great scenery, great riding. Arriving at Seneca Falls, it is hot, sunny, and humid. I don’t expect my clothes to dry. My  bike needed a good cleaning.

Early in the day we rode through forests. Later it was wine country. They routed us along lake shores, so it was the scenic route – we probably doubled the distance between the two towns.

The trip took on an international flavor as we passed through Atlanta, Naples, Italy, Middlesex, and Geneva.

Seneca Falls is the birthplace of the first wave of feminism in the US, which is commemorated by a historic site. 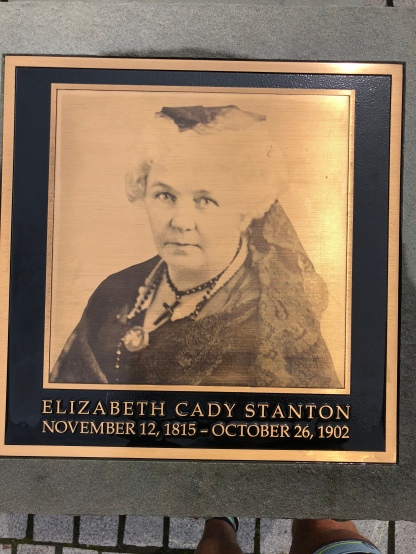 We’re on our penultimate week in this journey. That is sometimes hard to believe.

It was 75 degrees at 5:30 AM. It did not get cooler as the day went on. Many campers had fires going all day Sunday. Must be some primitive urge, as I could see no good reason to have a campfire on a 95 degree day, especially during the daylight hours. The air was thick with smoke.

We started the day by crossing the Rainbow Bridge from Canada back to the US. While looking back from the falls I saw a structure that looked suspiciously like the Space Needle. Rather than looking it up, I’ll ask if any of you know what it is. 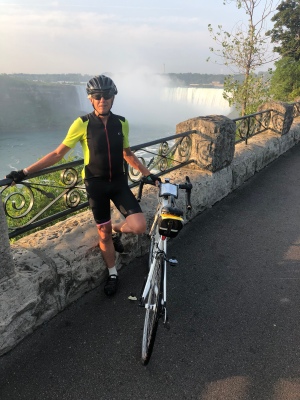 Back in the US we ran into a stretch of horrendous road awaiting repaving. I think I accumulated several years worth of head trauma from the shaking. 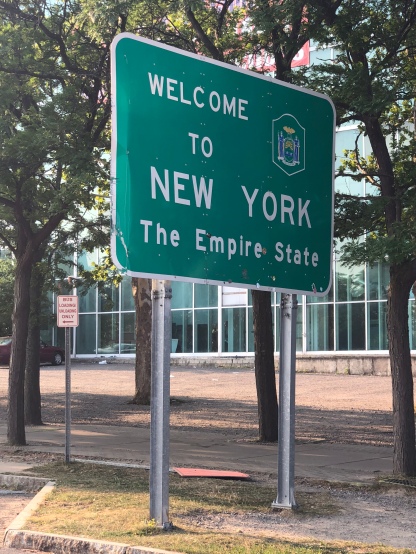 The first 15-20 miles were urban riding, then mixed urban/suburban riding, suburban/small town (where the suburbs of one town bled into the next). Finally after 50 miles we got into the country with mixed farmland and forest. At mile 58 I heard a train as I approached a crossing. I was across in plenty of time but knew we would cross those tracks again in a few miles. I tried racing the train but its route was much more direct than mine – enough so that I didn’t have to wait; it was already through the crossing.

We had two detours after cue sheets were passed out last night, so we followed arrows on the pavement and not the cue sheet. Mileage was thus unknown until we arrived at SUNY-Geneseo.

We arrived to a darkening sky. Later riders were hit by a thunderstorm. So far here there has been rumbling and a few drops.

Lest any of you think I am writing this in my parents’ basement and faking the photos, check out the Cycle America Facebook page for actual photos of me in various places across the country. Plus, my parents have been dead for years.

By Jacob Stockinger Here is a special posting, a review written by frequent guest critic and writer for this blog, John W. Barker. Barker (below) is an emeritus professor of Medieval history at the University of Wisconsin-Madison. He also is a well-known classical music critic who writes for Isthmus and the American Record Guide, and who hosts an early music […]

A heat advisory today. I forced myself to sleep in until nearly 7. Cleaned and lubed bike, replaced cleats and heel pads on shoes, charged phone, put away clean laundry. Backup battery is on solar charger now. To a fast food place to listen to MAYCO concert online due to slow connection at campground. A great concert except that the stream went offline for a while. Is will be rebroadcast on WVMO on August 19 at 3 PM, both on air and online. As a result, I was able to find this 3 Stooges clip I inexplicably recall from childhood. I’ll upload this post before I return to camp, or it’ll never upload.

I didn’t go to the falls today, as the bus trip is over an hour each way and I was advised that traffic was terrible for a bike ride (but had been OK at 7 AM). We’ll be crossing the border Monday morning so I’ll see the Falls then.

Several new riders are coming online for this week, and one staff member is returning after being gone for a few weeks. 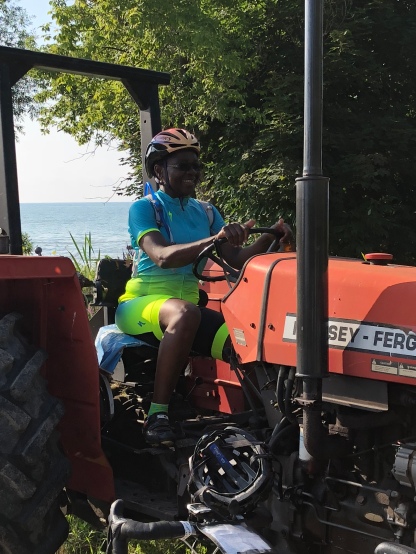 A hay bale tractor and a tractor driving doctor.