Who knew you could get to Baraboo by car as well as by bike? Even on some of the same roads! Frankly, any scenery that looks good at 60 mph looks better at 20. But this weekend found the half-fast cycling club off to Baraboo for the second time in a week; this time in a car.

The occasion was our 25th wedding anniversary. We stayed in an apartment above the Little Village Cafe. It was a beautiful 2 bedroom apartment overlooking the town square and decorated with circus posters. 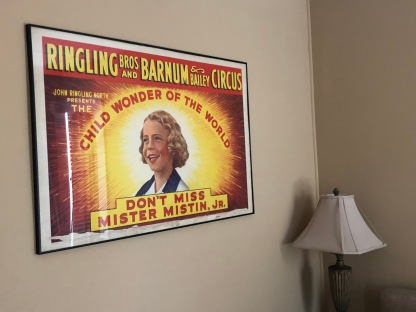 I had no idea who Mister Mistin, Jr was, so I had to look him up. He was the star of the 1953 season of the Ringling Brothers Circus, discovered by John Ringling in a circus in Sweden. In Sweden he performed under the name of “Baby Mistin”, but Ringling, to emphasize the child’s prodigiousness, dubbed him “Mister”. Mistin had made his debut in Belgium at the age of two and, by the time he came to the US, claimed to speak five languages. His tenure with the Ringling Brothers lasted one season.

Baraboo is a small enough town to walk everywhere – to the Al Ringling Theatre next door, to the Circus World Museum, to the park and zoo, to the children’s museum, and to the Driftless Glen Distillery. Devil’s Lake State Park, Parfrey’s Glen, and Durward’s Glen are all a short ride (or drive) away. Walking past the children’s museum at night we saw a dragon (one of several in town) and a firetruck.

A great dinner at The Little Village, breakfast at the Broadway Diner (where we sat almost close enough to the griddle to cook from our stools), but the hike in Devil’s Lake was derailed by a cold mist that made the apartment seem much more inviting. We finally ventured out after dark again for dinner at the Driftless Glen Distillery. A phenomenal dinner ( a great mushroom sauce on pasta) and the spirits weren’t bad, either. Back across Lake Wisconsin on the Merrimac Ferry and the real world beckons once again. The leaves that were just a pretty sight in Baraboo have to be raked here.

One thought on “Baraboo re-do”