A Busch Light can means the half-fast cycling club cleaned its adopted highway again. No further news on that front.

Our neighborhood summer festivals were combined into one this year. We walked down to the park just long enough to see the set by the Joel Paterson Trio. Joel grew up a few blocks from here. He spent his teen years playing the blues at a neighborhood bar, then moved to Chicago where he plays in multiple bands. A self-proclaimed guitar geek, he plays swing, rockabilly, country, and blues (and a little Hawaiian guitar).

There’s lots more where that came from, including some Scotty Moore (Elvis Presley’s guitarist) and Chet Atkins tributes. I think he should be famous. Listen and see if you agree.

Yeah, I’ve been riding my bike a lot. Back-to-back weekends with centuries coming up in September, so 50-60 mile rides twice a week as well as daily commuting and Wednesday night rides. I haven’t ridden 100 miles in a day since 2019, so we’ll see if I still can.

It’s tobacco season, so last week I rode past a crew out cutting tobacco, and this week rode past sheds full of drying tobacco. If you’re not from around here, you probably didn’t realize Wisconsin is tobacco country. Tobacco used to be grown here as cigar wrappers and is now mostly for chewing. It was once a major cash crop. A farmer got an allotment from the state, allowing a set number of acres to be grown. It was hard work (hand planted, hand cut, hand tied and hung, hand stripped from the veins after curing, and bundled for sale) but virtually guaranteed income. If you had an allotment, you grew tobacco. I had a friend who bought a farm with a small allotment and the neighbors thought she was crazy because she chose not to grow tobacco. The tobacco shed (a large barn with louvers that can be opened to increase airflow, and a network of framing from which to hang the poles with bundles of leaves draped over them) was used for storage.

COVID cases are on the rise again and I just finished another tour of duty on the COVID units. Most of my patients this week were not vaccinated. I was vaccinated in December and January. While it is true that I am now magnetic, that’s just my personality and I was that way before the vaccine;) If you have seen the videos of people purporting to prove that the vaccine makes one magnetic, they are either more ignorant than I think they are, or they just blatantly dishonest. The videos show people sticking non-ferrous metals to their skin and claiming it is because the vaccine made them magnetic. I have duplicated that with a penny, bobby pin, paper clip, money clip, button, and a Post-It note. Only one of those would have stuck were magnetism at play. Lest you think I did anything heroic this week, I was safer in this gear (and the sanitation process I go through as I enter and leave each room) than you are if you go into a store, restaurant, or bar (especially if you don’t wear a mask, or anyone else in there doesn’t). You don’t know if you are near someone who is positive. I do.

I went on a long ride Sunday – long mostly because of the 20+ mph headwind for the first 35 miles. I got home in time to see Joel Paterson and the Modern Sounds at the Pursuit of 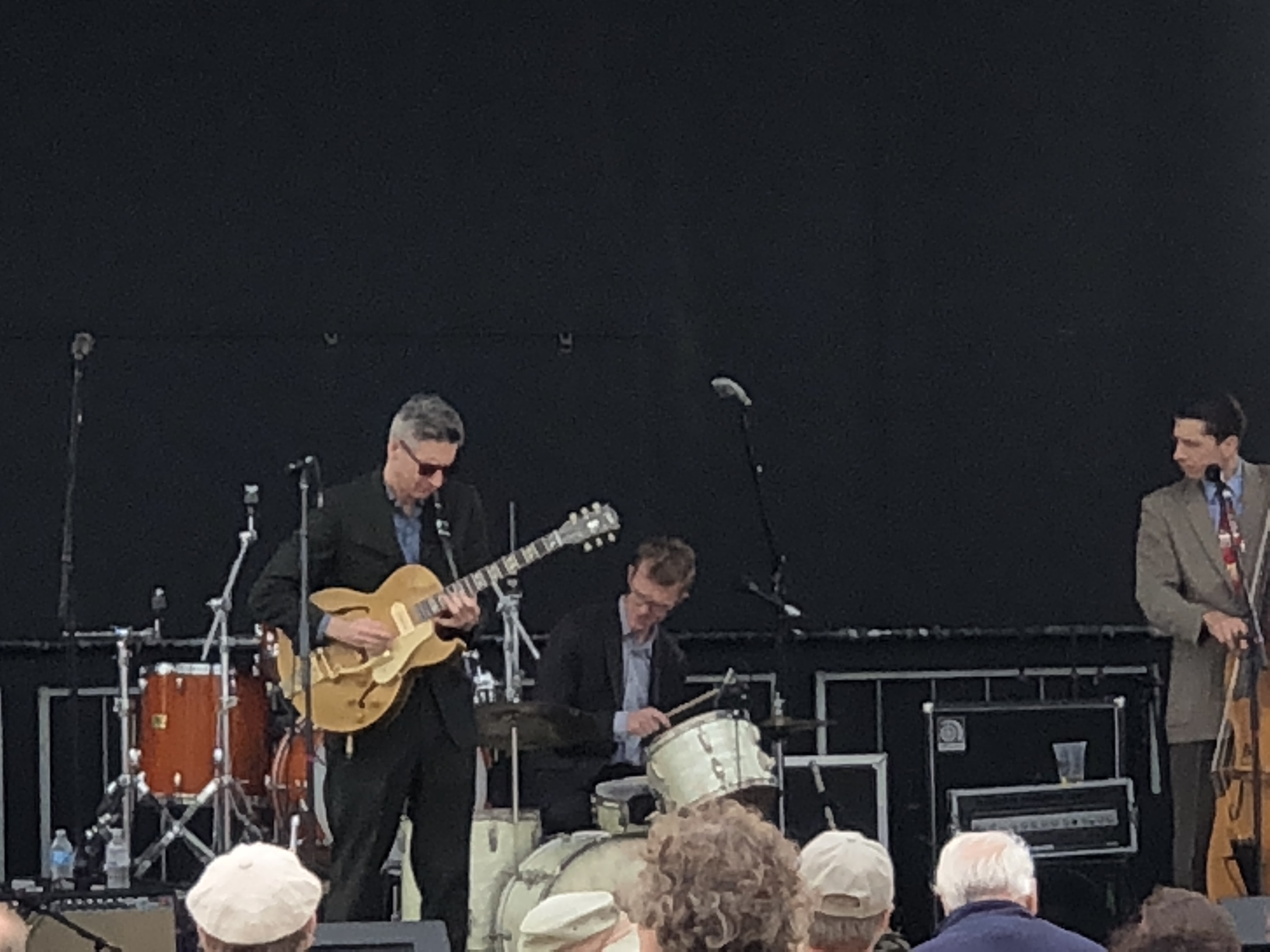 Happiness Festival. Joel is a phenomenal guitarist who can play anything. He has a number of bands to give him a chance to play multiple styles. The Modern Sounds play old jazz and swing with a little rockabilly, R&B, and blues in the mix. He started playing in these parts as a kid, then grew up and moved to Chicago. He also figures into my life in an indirect sort of way.

Those who know me in another part of my life know I work in health care. It was Joel’s mom who started me on that path. When I was 20 I injured my ankle. I was treated in an emergency room (after fashioning a crutch to get back down from the mountains, but that’s another story) while traveling but it didn’t get better. Walking was an interesting adventure. Running was out of the question. I went to my local free clinic (The Near East Side Community Health Center, which has merged into Access Community Health Centers, run by my friend Ken Loving – another story for another time).

In the free clinic, there was a volunteer position called “Patient Advocate”. The Advocate’s job was to act as a medical assistant (gathering health history and chief complaint) and more. It was the advocate’s job to be sure the patient’s needs were met. The advocate helped the patient formulate questions for the doctor, guided them with follow up questions as needed, and ensured that their needs were met before the doctor left the room.

Joel’s mom was my advocate. (She had also been my sister’s high school classmate.) Before I left the clinic that night, she extracted a promise that I would return as a patient advocate after I saw the orthopedic surgeon they referred me to.

I went back and volunteered as an advocate for a few years. Something must have stuck with me, as I became an Occupational Therapist about 25 years later. Patient advocacy is still an important part of my job.

Joel has a YouTube channel that can give you an idea of his range. Or you can look at what others have uploaded here. I’m not sure what to pick to just link to one or two things. Here’s a Scotty Moore tribute:

Here’s a bit of swing:

Now go listen to him live and buy his albums. A musician can’t make a living if all we do is watch his/her YouTube videos.

Back to bikes for a minute. A while back I posted a series on bike safety. I thought I was done but I left something out – and it’s something I’ve used the past few days.

It’s a baseball metaphor. For those of you who have played, you know what it means to “look the runner back”. You can skip the next paragraph. For those who don’t, read on.

If you’re playing shortstop and there’s a runner on second and a ground ball is hit to you, your natural play is to throw the batter out at first; but you don’t want the runner on second to go to third. You “look him/her back”. You make eye contact in a way that says, “If you break for third, you’re out. Better stay where you are.” When the runner turns back to second, you make your play at first.

It works with drivers. You’re at a four way stop. The car to your left was there first and has the right of way. You let her/him go. The car behind her/him decides to go at the same time. You look her/him back; making eye contact in a way that says, “wait your turn.” That driver know it’s your turn to go and was hoping you’d be cowed because their car is bigger than your bike. Most of the time, the driver will acquiesce, knowing they were trying to pull a fast one. If they go anyway, you let them. You both know what’s what.

In this way you can be an assertive, not aggressive, bicyclist.