We have arrived in Northfield for a day off. My tent is dry, my laundry is in the machine.

It was a beautiful day – warm, sunny, breezy. I saw trees – not just a tree or a windbreak, but actual woods!

Even the air smells and tastes richer here. 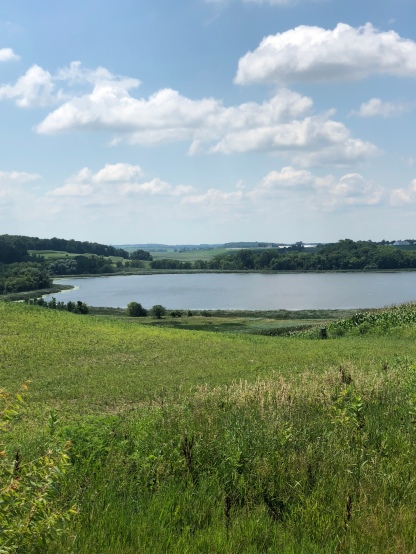 We saw the famous 2-story outhouse. I couldn’t figure out how you get in the upper door, and I wondered why there is a power line to it.

The most remarkable thing about this group of people is how unremarkable we are. Sure, we have our eight time iron (wo)man and a former competitive arm wrestler (who retired when she broke her arm in competition) and the guy who has ridden cross-country seven times now (five of them self-contained), but if a bunch of us walked into a café you wouldn’t think anything of it if we weren’t wearing these weird biking clothes. If a bunch of NFL players walk into a café, you know it. We are a bunch of unremarkable people doing a remarkable thing.

A while back I wrote about what to bring for a trip like this. Today I’ll talk about how that has worked out so far.

My duffle bag is infamous for its density. It contains tools and parts I hope not to need. The other night a rider needed a 16Nm (Newton meter) torque wrench. The one the mechanics have only reads to 6Nm. I had one.

I had my first “patient” (besides myself) needing Kinesio-tape. She saw the tape on my hamstring tendon insertion (which lasted a week, peeled off, and the tendon is now fine, thank you very much for asking).

I taped her Achilles‘ tendons and she told me that she rode pain-free for the first time after that.

I bought a new tent for the trip. My old one was pretty ratty. The new one has side entrances instead of at the end. They are on both sides and both have vestibules. I can store gear in one and use the other as an entrance.

It is a two-person tent so, when it is raining, I can keep all my gear inside with me. In addition to the usual gear pockets in the corners, there is a really handy net pocket in the ceiling, above my head, where I can safely store my glasses.

I bought a new sleeping pad. My old self-inflating pads are fine for a short trip but I would not want to use them for a bed for two months. This one is self-inflating and 2.5 inches thick. It is great, though would be heavy for backpacking.

I have a great fall/winter/spring sleeping bag but it is way too warm for summer. I have car camping bags (heavy, flannel-lined). I bought a new lightweight summer down bag. An unexpected bonus is that the zipper pull glows in the dark. I never realized that would be useful.

I thought about bringing only a flannel sheet and a fleece throw instead of a sleeeping bag. That still might have been a good idea.

I’m not mentioning brand names, lest you think this is a commercial site and someone is paying for my praise. If you want to know more, ask in the comments.

Some parachute cord and a few clothespins have come in really handy. While I usually wash my bike clothes in the shower with me, my collapsible kitchen sink has been handy when that was not possible (and to soak my feet).

I brought a mid-sized saddle bag; bigger than the one I usually carry that fits only a tube, patch kit, tire levers, and ID. It can’t hold rainwear or extra layers, but the straps that came with the sleeping pad  enable me to lash that stuff under it. So far it has been big enough.

An item that goes unnoticed is a water bottle and cage. Having a combination that works makes life much easier. I can reach down, get the bottle, drink, and put it back without looking or changing cadence. That’s a bigger deal than it seems and, if your bottle and cage don’t work well together, can be a repeated pain in the *ss.

Stuff wears out and gets used up

After a day off Sunday we will cross the Mississippi River into Wisconsin on Monday.

We have ridden >2500 miles. Five people are leaving after this week and 14 more are coming on. (I guess Wisconsin is popular.)

We’ll end the week with a ferry across Lake Michigan.