Once upon a time, colored margarine was illegal in Wisconsin. Smugglers brought contraband across the border. This is the tale of one such smuggler.

First, there are a few things to understand about butter and margarine. The color of butter varies with what the cows eat. In winter it is a pale cream color. In summer it is more yellow.

Margarine is naturally white. It looks a lot like lard. The margarine makers didn’t think they could compete with butter with a product that looked like lard, so they dyed it yellow to look like butter.

The butter makers were now faced with a problem: their product didn’t look like itself; that is, it didn’t have the uniform yellow color that folks were trained (by dyed margarine) to think was “normal”. So butter is now dyed (usually with anatto, from the seeds of the achiote tree) so that it looks the same all year.

Now Wisconsin, being “America’s Dairyland”, didn’t want the competition from cheap margarine, so it was banned – unless you bought it in its natural white state. It often 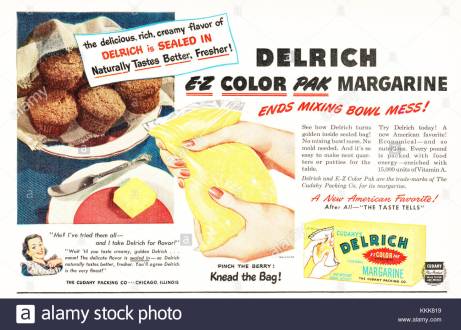 came in a plastic bag with a little capsule of yellow dye that you could break open and squeeze through the margarine until it was a uniform yellow. Then, if you were really fancy, you squeezed it out into a mold to make sticks.

If you wanted margarine that was yellow and in sticks, you crossed the border into Illinois or Minnesota (or the UP, if you lived up north) to smuggle it back. That’s where Milly comes in. Milly was an ordinary Wisconsin housewife, not prone to breaking laws. But she had 6 hungry kids to feed and a husband who gave her a household allowance that meant corners had to be cut. Butter was one such corner.

When supplies ran low, Milly and her husband packed the kids into the station wagon and headed for South Beloit to score. The contraband was available right on the border – a store with a white line painted on the floor. On the Illinois side of the line, a cooler held the golden elixir. It was cheaper farther into South Beloit, but some days we were in a hurry.

We’d pick up a few cases – for us, the neighbors, the cousins. They’d go under a blanket in the back of the station wagon, along with the youngest child, or however many kids didn’t fit in the seats. The irony of the situation is that we would stop outside of Orfordville for Sunday dinner with family friends who were dairy farmers.

The smuggling came to an end, not with an arrest, but with a change in the law. Gordy was a State Senator. He was the chief proponent of the margarine ban. He finally agreed to take a taste test on live TV and, if he failed, he would end his opposition. He failed, and colored oleomargarine became legal in Wisconsin in 1967.

I thought that was the end of the story, though I wondered how Senator Roselip failed a test that I’m pretty sure I could pass. It turns out that his wife had been secretly bootlegging margarine and feeding it to him for years. He identified that familiar taste as butter. The law repealing the ban still forbade restaurants from serving margarine unless the customer specifically requested it.

A few years ago I talked with Peter Berryman, in hope that he would turn this into a song reminiscent of “The Limburger Ballad”.

He hasn’t written it yet. I told this story to someone the other day and she said I had to write it down. So here it is. And just in time for the return of winter.