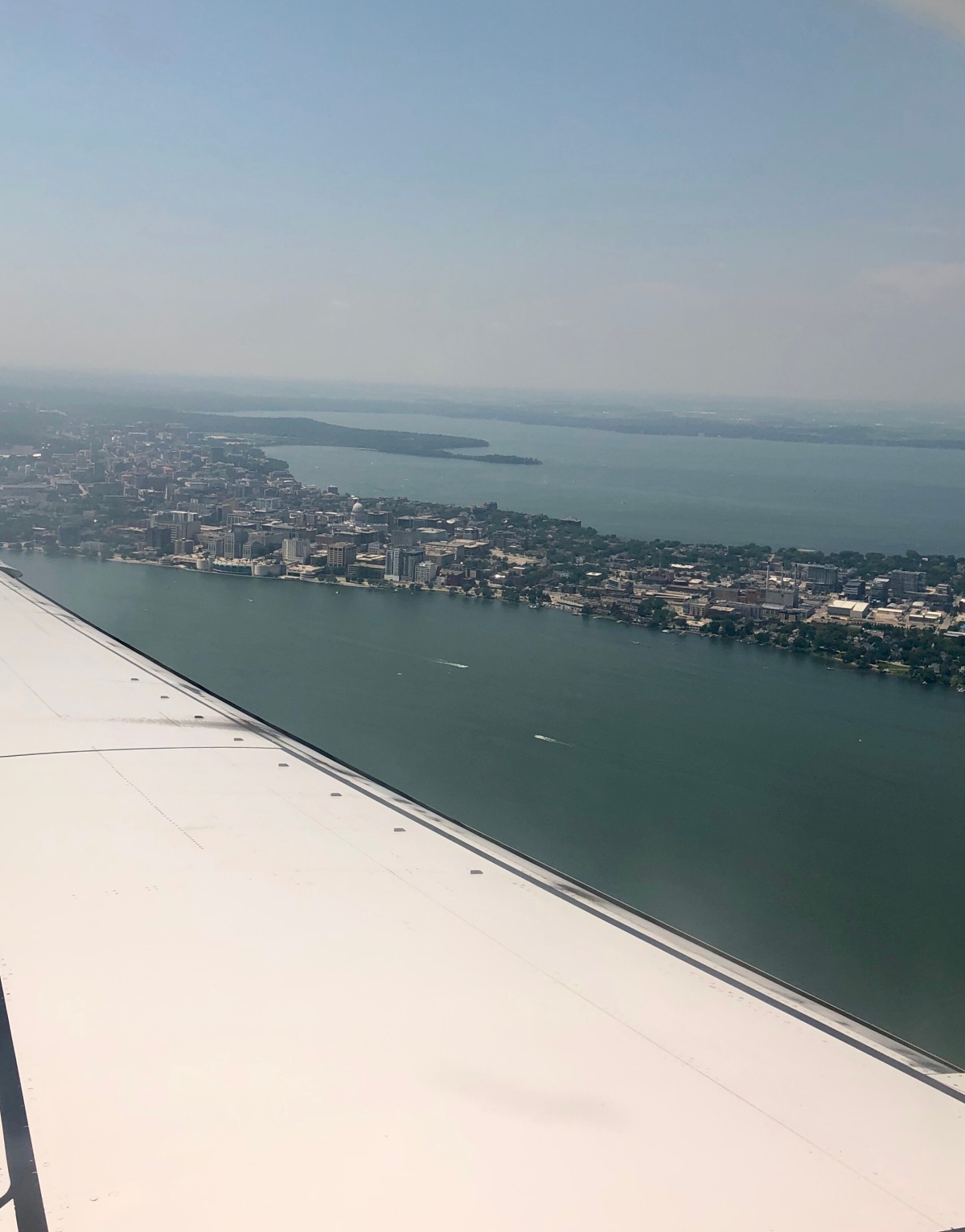 Flying back home, I looked out the plane window to see this:

My house is just out of sight to the right of the frame. Nothing like living in a city that’s mostly water. I realized then that Dorothy was right.

I spent a few days in Estes Park, CO for a niece’s wedding, then a few more days in Oregon for another niece’s wedding. If I ever go looking for my heart’s desire, I won’t look any further than my own back yard, because if it isn’t there, I never really lost it to begin with.

That doesn’t mean I won’t leave my back yard now and then. But, back in my own back yard (On Wednesday night’s bike ride), I happened upon a badger crossing the road, then waddling off into the undergrowth. I didn’t try to take a picture – badgers are notoriously vicious. A few miles up the road, a doe bounded along beside me for about 100 yards before darting across the road and disappearing into the woods. A bit later, two dogs came out into the road to greet me. I guess that made up for none of my friends being able to join me for this ride.

In between the two weddings, I was home for La Fete de Marquette, our annual Bastille Day celebration. We celebrated with Cajun, Zydeco, and New Orleans funk royalty. Steve Riley and the Mamou Playboys played sets both Saturday and Sunday.

They were followed by Geno Delafose and French Rockin’ Boogie. Geno is the son of the late John Delafose and learned Zydeco accordion from his dad.

We rounded out the day with George Porter, Jr and Runnin’ Pardners. Porter was the bassist for the Meters, Wild Tchoupitoulas, and the Neville Brothers; in other words, he is the bassist of New Orleans funk.

And, speaking of bassists, I also caught a set by Josh Cohen at the Art Fair Off the Square. While he also got funky at times, here’s something completely different:

La Fete is held in McPike Park. While waiting in a food line, I heard someone lamenting that it used to be Central Park but, as usual, wealth won out and the park was renamed after some rich person who gave the city a lot of money. I was happy to inform her that, while that is all too common, it wasn’t the case here. Milt McPike was the principal of East High School. (Articles about him often attach the word “beloved”. Personally, I can’t imagine loving my school principal, but “respected” might fit.) Milt was a role model – an African American athlete who made it as a pro (San Francisco 49ers) but also got an education so he would have a life after football. He spoke at my children’s kindergarten graduations, telling them that he expected to see them all graduating from East in 18 years.

UPDATES FROM THE ROAD

Bob, Terry, and Ken from last year’s coast-to-coast ride have completed their 1600 km circumnavigation of France. Charlie is on his 8th crossing of the US, now in Montana, going east to west. Jeremy abandoned the Great Divide Ride in West Yellowstone, MT, having completed 929 grueling off-road miles in 12 days. His hands had taken a beating.

Flying to Oregon, the clouds parted and something looked familiar below. The map showed we were flying over Gillette, WY, the site of last summer’s worst nightmare. I followed our route in reverse from above, looking down and at pictures from last year. It looks different from 30,000 feet. I had to supply the details.

P.S. Happy Golden Birthday to you know who. (Well, you may not, but they do.)