It was another Jekyll and Hyde day. Fast and easy in the morning, a slog in the afternoon.

We spent the night at the Rapid City Fairgrounds (camped outside the Fine Arts Building). They turn their dead trees into sculptures. Here are two of them and a candidate for future work. 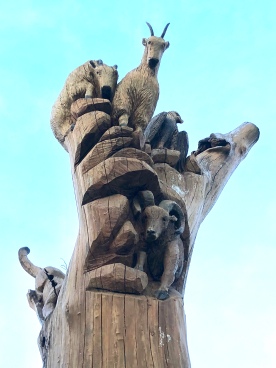 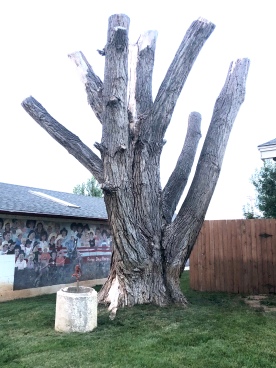 There was a Rotary Club picnic nestled between the two halves of our campsite. I chatted with some Rotarians – the first group were fascinated and amazed by us – then I found the storytellers.

I talked with two divers – one headed for Palau, and another who may not still be diving but was full of stories. He has lived all over the country and in Australia (Navy) and told of his near-death experience diving at the wrong time of year in Haunama Bay on Oahu.

This gives me a handy excuse to link to Jake Shimabukuro:

Since the ukulele is currently popular, you owe it to yourself to hear someone really play it. Jake will be on the West Coast this month, then the East Coast. On September 24 he’ll be at the Overture Center in Madison, WI (per the Overture Center) or at the Capitol Theatre in Davenport, Iowa (per his website).

We left Rapid City on an expressway with fast commuter (?) traffic. I wasted no time getting out of town, riding at a steady 24 mph until I was past the airport, then backed off a bit.

We rode through the Buffalo Gap National Grassland (the name appears ironic, as it was mostly barren) and skirted the Badlands. We’ll see more of the Badlands tomorrow. 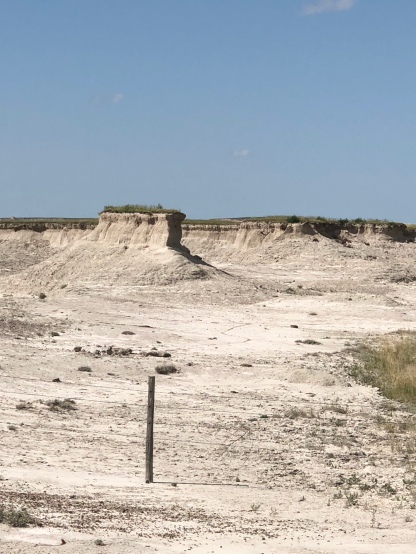 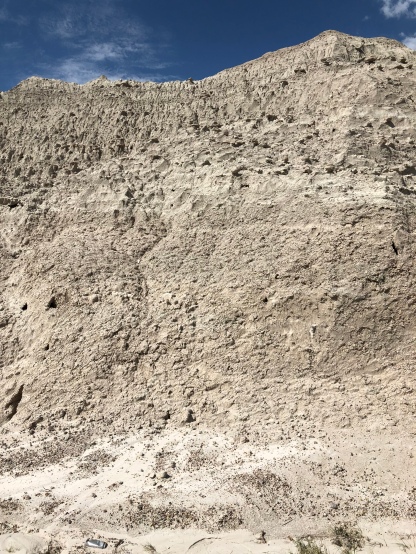 The first photo is sort of a “mini-badland”. That flat-topped area in the foreground is less than 10 feet tall. The second photo is up close and personal with a wall next to the highway.

It was a fast morning, cool and cloudy, with favorable winds. After our picnic (they don’t like to call it lunch – today it was at 9:30 AM) stop in Scenic, SD, everything changed.

We faced a 20 mph headwind and blazing sun for the next 30 miles into Interior, SD. We’re now ensconced in a campground at the edge of town – with a population of 67, pretty much everything is the “edge of town”.

The campground has a store, so I had a bottled (Dunkin’ Donuts) latte on arrival and a “Knuckle Head Red” (from the Knuckle Brewing Company in Sturgis) after setting up camp and taking a shower. (Truth be told, I’m drinking it now.)

It rained overnight in Rapid City, so I had to dry stuff out before setting up camp – being windy has its benefits. 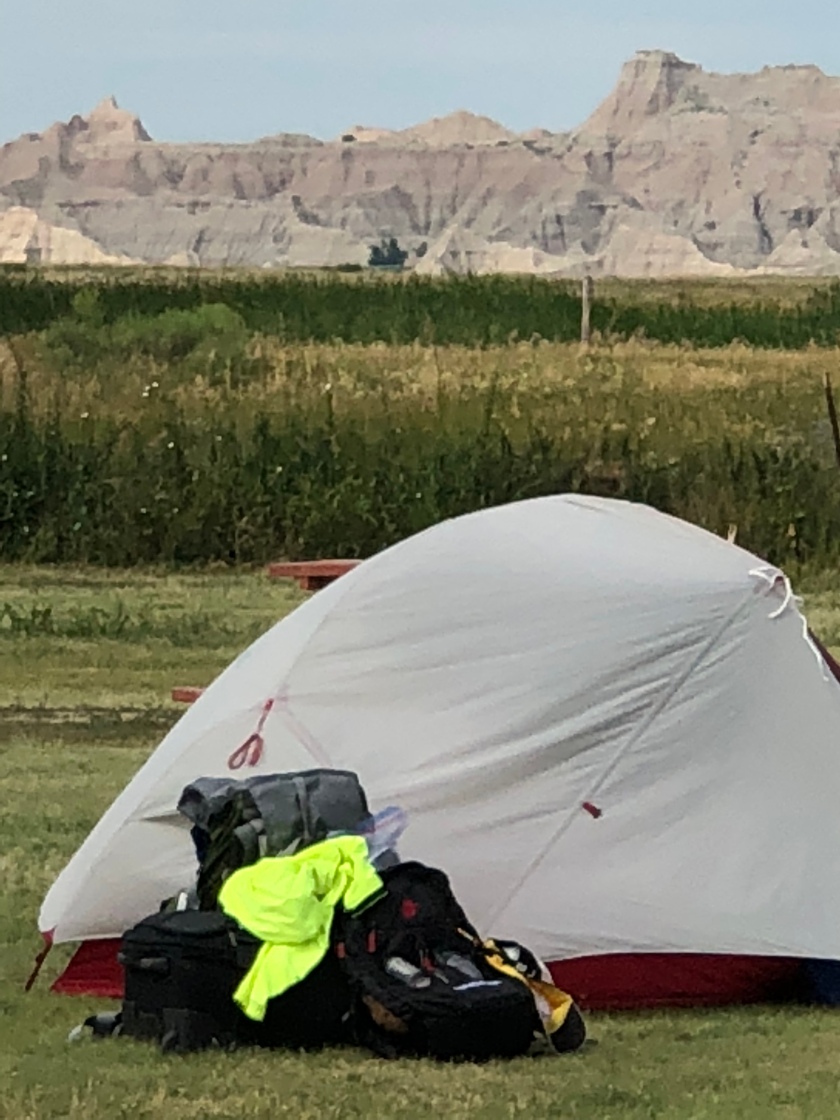 This last photo will probably be appreciated only by plumbers. It is the urinal in the campground. In the space of a few inches it includes iron pipe, copper tubing, and a brass fitting. The flush valve is a valve from a bubbler (drinking fountain to you foreigners). It is not particularly straight. I chose not to replumb it;)

The sky is slowly filling with clouds. More rain may be on the way.

I take it back – rain isn’t “on the way”. While proofreading this, rain appeared suddenly. I ran to put the rainfly on the tent and stash everything that was out to dry inside before it got wetter. I took my laundry down and then realized that the tin-roofed shelter I’m under is full of holes.

Just as suddenly, the rain has stopped. I’ll rehang the laundry, but I think everything else will stay in the tent.

We started today with a gentle climb through mixed aspen, birch, and pine forest.

It doesn’t look like we’re climbing, but I need to look to make sure my tires aren’t flat and I’m not dragging a sea anchor. As our elevation approaches 6000 feet I see on the cue sheet we are about to climb 1.1 miles. I’m not sure what he thinks we’ve been doing for the last 5 1/2 miles. A half mile later it becomes clear. Before this we’ve just been going up, now we’re actually climbing. When I run out of gears, it’s obvious. (Dictated at the time; that’s why it’s in present tense.)

We rode up Needles Highway, where I overheard, “What planet are we on?” It was an otherworldly landscape. Rocky  spires rose everywhere, coming right to the edge of the road. The road itself was possibly the most beautiful pavement I have ever seen, a narrow, barely 2 lane ribbon of flawless asphalt, too narrow for trucks or RVs, just big enough for regular cars.

I could have spent the whole day there. Someday it would be great fun to take that entire road at speed, were it closed to all other traffic. I would first want to ride it slowly at least 10 more times to enjoy the scenery.

We had to share a narrow tunnel with a family of mountain goats. 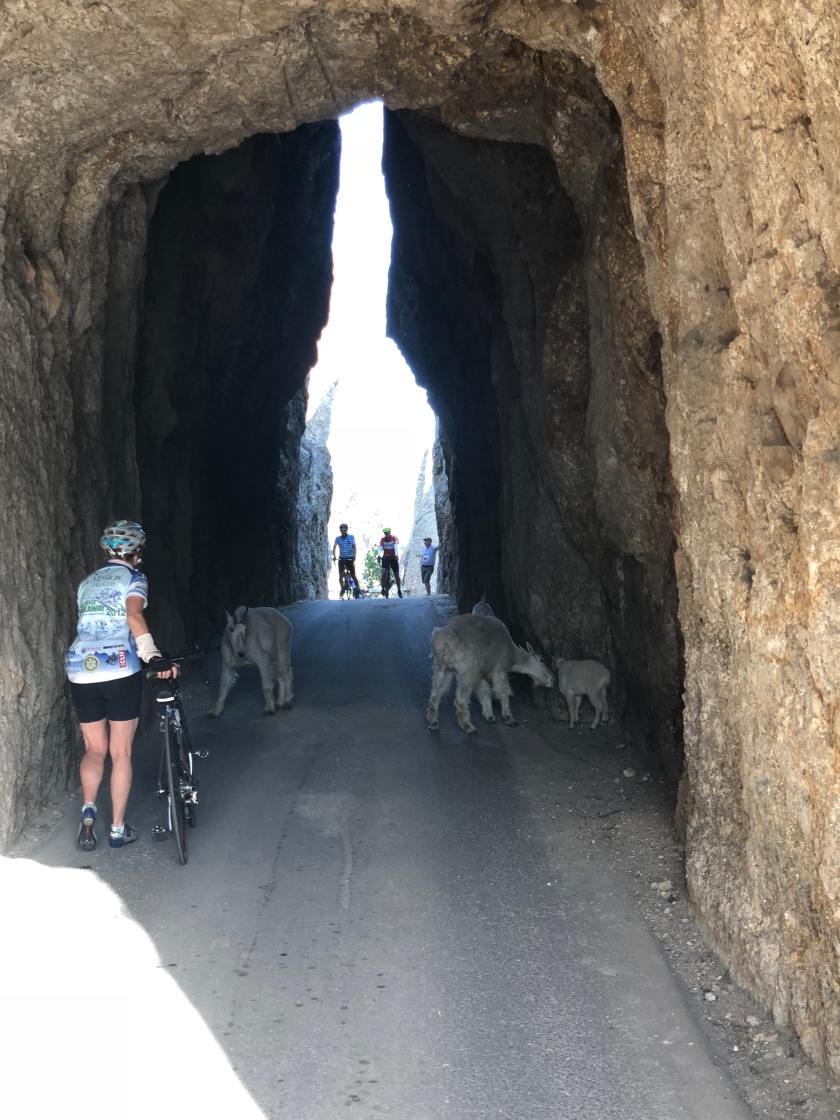 This could have been a day trip – ride up to the Needles Highway, ride it a couple of times, get out and walk around, go back to where we started.

But it was only the beginning. Next up was Iron Mountain Highway. A small sign announced how may switchbacks were to come. I didn’t bother to take a picture, nor to count them.

Iron Mountain Highway also boasts “pigtail bridges”, wooden bridges that create a helix, so you ride over the bridge, then curl around and ride under it – like a freeway off ramp in miniature, and built of logs. (Difficult to see in the image below, but the road curls back under the bridge.)

We climbed the mountain and had a view of Mt Rushmore. It was an up and down day, over 5000 feet of climbing, but way too much fun to be of any concern. This may have been our last foray over 6000 feet.

In Keystone we saw a rare sight – a telephone booth. Also bison grazing by the roadside. 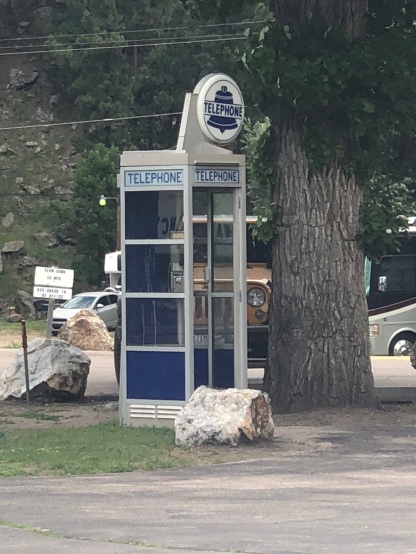 Food deserves a mention – last night’s dinner in Custer was from a caterer in Rapid City. It included a spinach/artichoke lasagne and focaccia bread. Lunch today (from our staff) featured risotto and pesto bread. We’ll have the same caterer for the next two nights. This also gives me an excuse to show you the catering truck from Gillette; as you can see, it is rather large.

The route into Rapid City was bad enough that the boss apologized for it. It was miserable (long climb, headwind, busy highway) but not enough to ruin the day.