One of the people I rode with this morning said that, at his work, they block his late afternoon schedule on Wednesdays and label it “church”. Today is Sunday, the day when many of the Christian persuasion go to church. 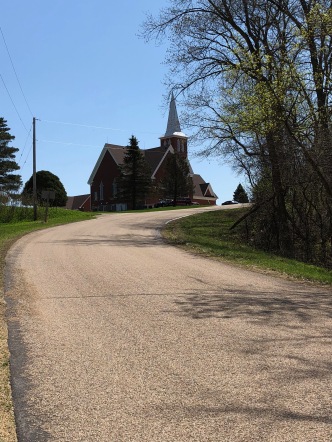 Three loads of laundry started the day, followed by 60 miles of church. We rode up Vermont Church Road which leads, of course, to Vermont Lutheran Church, home of the annual Bike Breakfast and Blessing of the Bikes. This year it will be Sunday, May 20. The church is, fittingly, at the top of a hill.

Church was not confined to this building. Today is one of those days when people say, “You couldn’t have asked for a nicer day!” I thought about what I would ask for. I couldn’t come up with anything.

I saw more motorcycles than bikes on the road. For that matter, I didn’t see any bikes going my way for about 25 miles.

I ended up in the fast group through no fault of my own. As you well know, I’m only half-fast. The first climb separated us and the guy next to me said, “I think that’s the end of the pack.” The four of us rode together for the next 30-some miles. There was a route 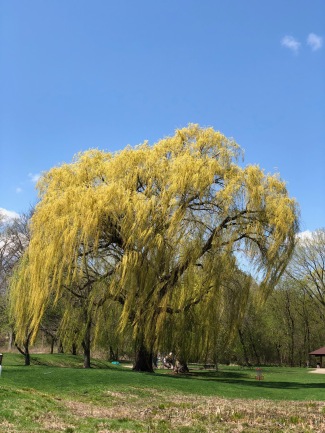 option that we hadn’t discussed. We were on the “long route” and there was an “Alpe d’Huez Option” with two more big climbs. I was at the front of the group on a descent and took the easy way out. When next I looked back, no one had followed. I passed two other riders in the next mile and then saw no one until two of the original group caught me coming back into town. I was thankful for the company (and the lead-out through unfamiliar suburban territory).

The willows are in bloom. The countryside was filled with that glorious color we call “spring green” (to be confused with the town of the same name), the delicate yellow-green of blossoms that will give way to the fuller-bodied green of leaves.

Church wasn’t over yet. On the radio on the way home I heard Alison Krauss singing “Down in the River to Pray” on WVMO (You can listen on-line, as it is a low-power station that reaches the west side of town on a good day.)

Church was still in session with “Sunday Afternoon Live at the Chazen“, a live stream on the first Sunday of the month. If you keep reading, this won’t be the last you’ll hear of this program. I’ll be encouraging you to tune in August 5, 12:30 PM CDT. I’ll be in Niagara Falls, Ontario. Where will you be?

Today featured the Pro Arte Quartet. (A quartet founded in Belgium in 1911, they found themselves stranded in Madison, WI, USA when WWII broke out in Europe. They were offered an artist-in-residence position at the University of Wisconsin and they’re still here.) For the second half of the program they were joined by the Hunt Quartet (a graduate student quartet) for Mendelssohn’s Octet in E-flat minor. The standing ovation was well-deservedto my ears.

I suppose it would be stretching the metaphor to consider my post-ride beer with lunch at Monty’s Blue Plate Diner to be a sacrament. Monty’s is in a former gas station (run by a childhood neighbor’s dad and uncle as Havey Brothers Texaco) and is the first place my son entered upon moving to Madison. (I can’t say “set foot in”, as he was 3½ months old and didn’t walk in.) We had lunch there on the way home from the airport, so he hadn’t yet seen his new home. When he was two he asked for a job there, it being his favorite restaurant. The waiter promised him an application. He expressed his displeasure when we arrived home and he hadn’t received his application. He showed them by becoming a musician instead of a fast-food waiter. (One might argue they are not mutually exclusive.) 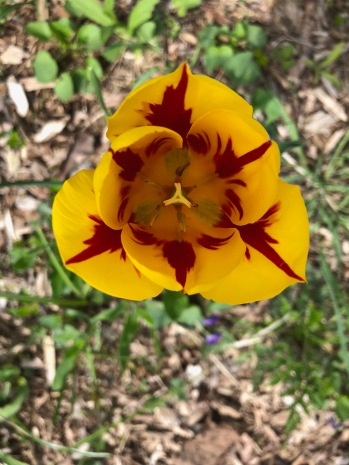 after lunch likewise was probably not

sacramental, but the tulip was. And the bike sculpture is a final image from the walk home. Now to fold and put away that laundry from this morning and iron my shirts. 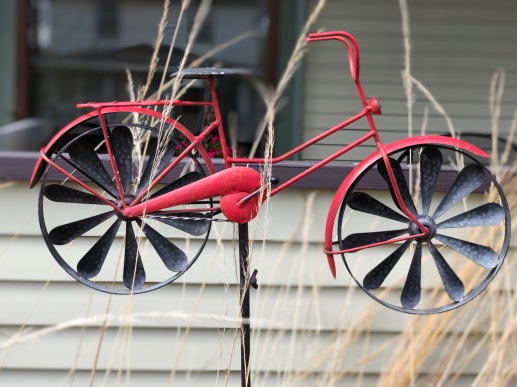 One thought on “Church”